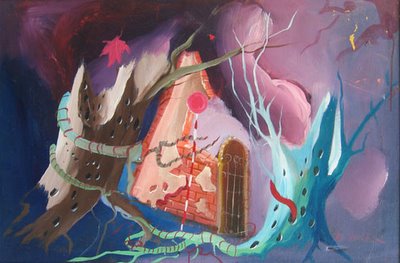 Comments:
I've fallen in love with this painting. I can't believe someone could toss it, it's beautiful!

D Vacek, born in Yugoslavia June 23, 49. Left medicine for art. His work has been exhibited in Yugoslavia and Italy. It's represented in many private collections including President Tito. His work reflects the influence of Salvador Dali with the colors of Rembrandt. Bought one for $150. ten years ago. Might want to hang on to those.

I have an oil painting that was left to me by my grandmother it has a card attached from Heritiage Galleries it is titled New Smyrna Beach 1975. Signed, D Vacek

Did Vacek paint maritime scenes? I have a very large oil on canvas of a very stormy sea.
Thanks, Marian

BTW, the stormy sea is signed exactly same as the abstract found on sidewalk.
Thanks again,
Marian

Marian, yes. I have a few of his Florida works. Eric

I have recently acquired a painting I believe to by him what is his first name any thoughts.

His first name is Daniel. Does anyone know what happened to him ?

<< Home
Abandoned photographs, broken toys, electronic parts, discarded paintings, bullet casings, rusted metal, splattered food and other detrius I find in the streets of Philadelphia. This blog is associated with The Abandoned Photo Museum at www.heudnsk.com. CLICK THUMBNAILS AT LEFT TO ENLARGE!

MY OTHER PHOTOGRAPHY SITES: